I am a UKA course measurer(Grade 1) and also IAAF accredited,and endurance official and am also able to act as race referee or event adjudicator 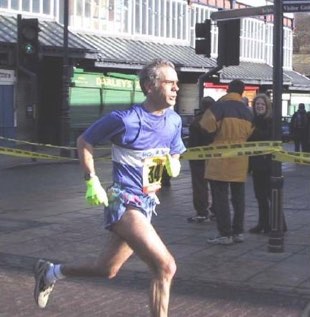 I started running in 1983,shortly after the first London Marathon.I ran my first marathon in 1984(Bradford) and joined Horsforth Harriers shortly afterwards. I have since completed around 16 road marathons (and many more off-road)including several London marathons and New York in 2000. Age and ill-health has curtailed my running performances somewhat,but I still manage to run 4-5 miles 3 times a week ,including the "Bun and Butty Club" - a morning session(average age 60s ! ),an off-shoot of Horsforth Harriers.